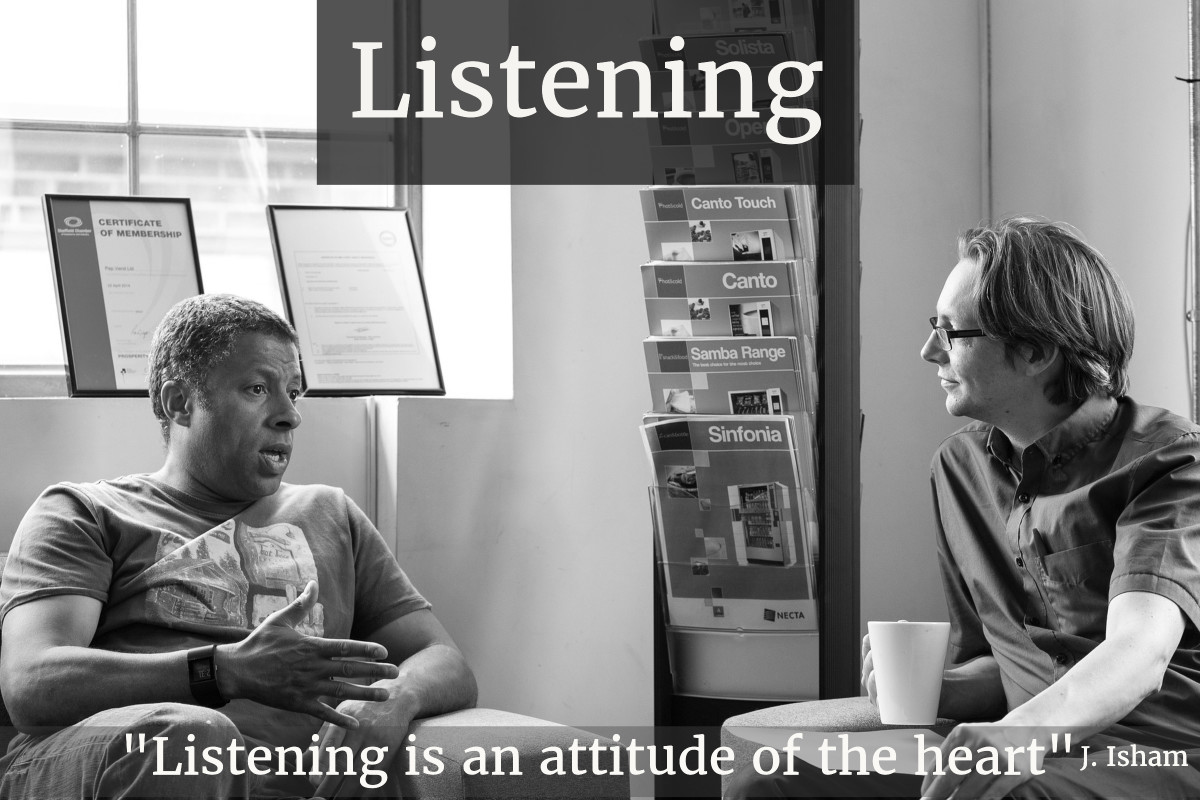 Listening is an attitude
of the heart

When I happened upon the above quote I stopped and stared at it for a few moments, and by stop I mean I stopped moving, thinking and even breathing. I suspect it was because at that moment all of me became connected to the quote in agreement. If I had been with Castaneda and Don Juan at that moment perhaps Don Juan would have looked hopefully at poor Carlos, slapped his knee and said “now that’s an agreement.”  Or perhaps he would have just kept walking, who knows.

In a roundabout way I’m attempting to express how strongly the quote affected me, it struck my heart with connection.

Listening is one of those things we so often take for granted, just the other day while out with a friend at Starbucks I handed him my cell phone and explained why I liked how a certain website presentation was created to work perfectly on the cell without sacrificing the emotional appeal they were trying to generate.

Now in the bigger scheme of things it was not very important, I was nonetheless excited about what I was pointing out and what I was saying. My friend briefly scrolled through the cell presentation without saying a word and handed the phone back to me got up and said “let’s go.”  Wow I thought, that was a huge waste of words. For a moment I was erased, but only for a moment. 🙂

Now suppose this had happened in a team meeting, suppose a team member had ignored you completely, ignored your ideas, your explanations and your enthusiasm. How would you feel right at that moment and what are the chances that you’d bring that enthusiasm with you to your next team meeting? What are the odds that you’d soon step outside yourself and take a risk?

Can you imagine a giant scoreboard on the roof of the above business, would the tally be moving up or down as the team meeting was concluding? Do you think a business that allows meetings such as the one above is actively encouraging its employees in the art of becoming a better listener?

The above team scenario happens everyday across the globe, happens in big and small businesses everyday. Around the table teams quickly are categorized into leaders and followers with the leaders charting the course and doing most of the talking.

I gotta ask, where is listening in all the hype about creativity and innovation we hear so much about. Maybe its up to the employees to push Listening and Dialogue forward from the bottom up. What do you think?

Check out some of the items about listening from the list below, maybe something will spur you on to help shake up the status quo at your place of work. Maybe the art of becoming a better listener will catch hold and become viral, you can bet that if it does Don Juan and Carlos will be slapping their knees in agreement.

Think for a moment about how it feels when what you're attempting to communicate is actually captured and understood by the listener, it's great right?

When it works communication is a magical connection. When it works listening equals connection, now that's a simple formula I think we can all get behind.

How to Become a Better Listener: 10 Simple Tips

“I like to listen. I have learned a great deal from listening carefully. Most people never listen.” Ernest Hemingway

One of the great tips in this listening tips is to tell yourself you'll share this conversation with someone else later. This little promise to yourself can spur your listening to a deeper level.

5 Tips for Becoming a Better Listener

Tips number five reminds us to ask questions as a way of better hearing what the speaker is saying which leads to a deeper understanding and better listening.

How One Simple Change Can Make You A Better Listener

It sounds easy, but it's surprisingly hard for most of us: To become a better listener, stop focusing on what you'll say next.

This author suggests giving a brief summary of your understanding of what's just been said before you ask your question of the listener.

Everything You Need to Know About Becoming a Better Listener

You have ears. Here’s how to use them.

The author brings up some important points about what to do when we notice we've lost focus and we are either planning our response to the speaker or thinking about something off subject. Acknowledge your thoughts without judgment and move back to listening.

How to Become a Better Listener

How to Become a Better Listener. Research reveals that we tend to remember just 25 percent of what we hear. Developing the ability to listen, really listen, helps to build strong social and professional relationships as well as memory....

One great tip in this article is to show the speaker that you are listening by smiling, nodding and using eye contact. these small things encourage the speaker while helping you hold your focus on what's being said.